During the 1950s, massive government funding backed London's politicians in their determination to rid the city of its appaling slum housing. But there was a growing sense that as the planners eliminated London's worst housing, they were also unwittingly destroying the social fabric that tied its people together.

In 1957, two sociologists, Peter Willmott and Michael Young published a book that detailed what they saw the social damage caused by slum clearance: it was called Family and Kinship in East London. But this wasn't an attack on the ideals of the welfare state; in fact Young had helped create it. A few years earlier in 1945 he had written the Labour manifesto that was the blueprint for the new society.

But the sociologists were not alone. Many architects shared Willmott and Young's fears. The architects believed that they could evolve Modernism to preserve the best of the old society, while integrating it with the potential of the Welfare State.

George Finch persuaded the planners to let him build an experimental housing scheme near the Old Kent Road to test these new ideas. These pictures show the Modernist mews housing that was his solution. 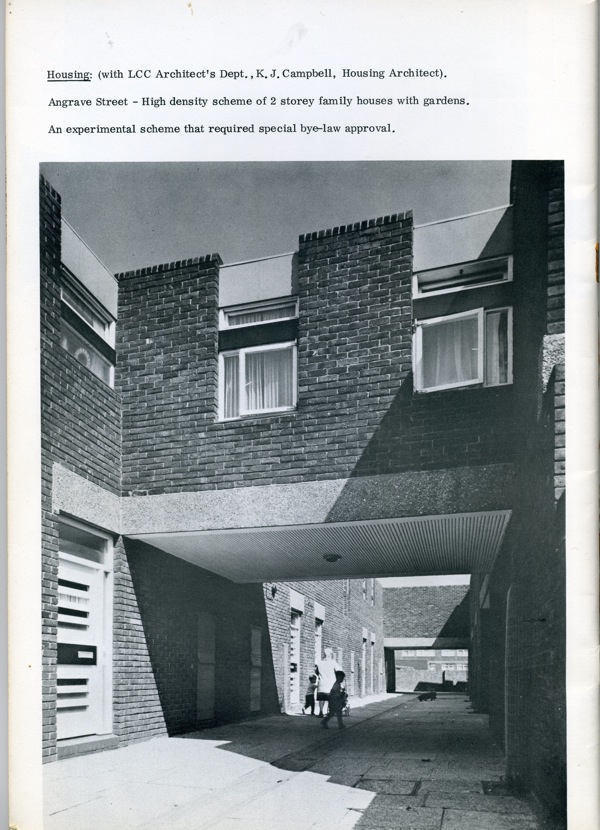 George Finch: "When I was at the LCC Architects Department I was interested in designing two storey houses with gardens, but with a tight urban character. A colleague and I were discussing this and came up with the idea of taking a slice of the rather boring, standard high slab block with maisonettes either side of a central corridor and putting it on the ground."

"Looking at the grim pictures of the slum housing that was gradually being cleared I was struck by the sense that despite the squalor of their environment, there was a feeling of togetherness. Families had to care for each other as there was nobody else. The closeness of the buildings with front doors facing each other seemed to me to contribute to this. Could one achieve this neighbourliness without the squalor?" 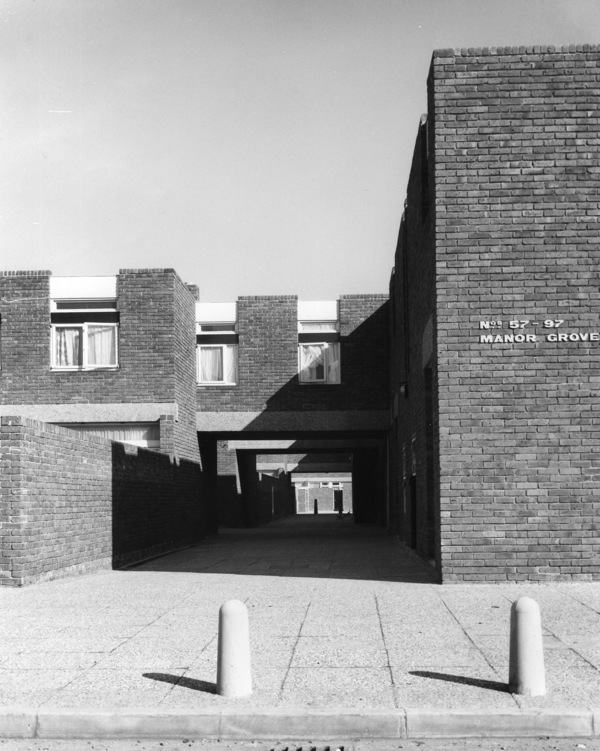 "The scheme comprises wide frontage two storey terrace houses with gardens. The basic plan with two bedrooms plus a wider type with a third bedroom spanning over the central walkway. The walkways intersect at right angles to form a group. To define the front doors I designed them with slots of coloured glass. At the end of each walkway there is a store for refuse and a trolley for transport along the walkways. Car parking areas are positioned at the ends of the routes."

"I was quite pleased with the built feel of the complex on completion and saw it as a standard that could be repeated with variations. But when the Housing Committee visited they objected that it was like the old slums and no more were built."